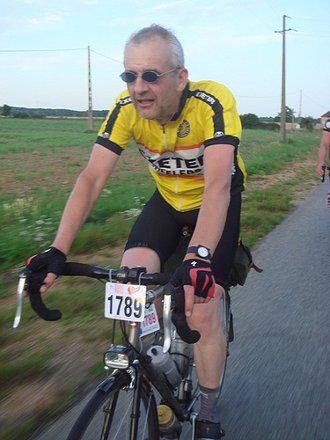 The LD line to Le Havre is cheaper than the ferry to Caen, and anyway I had conceived a fondness for the former port since being stranded there four years previously, the ferry leaving rather too precisely on time for Dr V's and my schedule. Preparation is everything, so I'd prepared a gps route to Paris and loaded it into the Garmin. A large roll-top sac strapped to the saddlebag carried the stuff I wouldn't need on the event.

Disembarking after a reasonable night's sleep on the boat, I switched on the Garmin and realised that I hadn't loaded any maps. A franglais of obscenities. Thinking about it I could remember quite a lot of the route from last time, and I'd researched the tricky bit off the ferry well enough that it was easy to recall. So after dodging through a carpark and some concrete barriers, I was on my way down the dusty Route Industrielle heading east. Before long I was crossing the Seine at the chain ferry to Quillebeuf and on my way. I missed one turn, half knowing that I had, so stopped and dragged the maps from the crammed recesses of the saddlebag. Rerouted, I reached Evreux just before dusk. I knew there were others staying at one hotel, but failed to find it. So it was a solitary meal with a waiter keen to practise his English, the bike safely parked in a creepily empty subterranean garage.

The second day, towards Paris with occasional cribs at the map, I joined the PBP route and sailed into Gambaiseuil, where a group of cyclists reclined on the grass beside the shop. They were New Englanders, Melinda Lyon among them. Keith and Ann Benton arrived, said hello, and left again. I joined the Americans for the last few kilometres to St Quentin – they knew the way having just ridden out. We parted at traffic lights.

The next task was finding the campsite 10km away, where a cabin and a bed awaited. I had a marker on the Garmin, but no roads to follow. Some guesswork with the map got me within shouting distance, and by trial and error I centred on the marker. The cabin was a two-storeyed gothic structure of rustic timber and corrugated iron. Jamie Andrews, Andy Heyting, and Joth and Emma Dixon were my fellow cabineers. Sundry other cyclists of various nationalities occupied cabins, caravans and tents around about us. After stowing the bikes and sorting out sleeping arrangements, we went foraging for beer and food.

Saturday was hot. We made our way to the gymnase for the bike check. There were stalls set up, including London-Edinburgh-London, and there were banners, crowds, noise, and a general air of slightly anxious conviviality. More food and beer.

Sunday was hotter. Andy and I found Drew Buck, who was anxious to explain the history of his latest novelty steed and also the various difficulties that lay ahead: loosening spokes, the near impossibility of puncture repair, and the remains of the original, hundred-year old saddle waiting to impart its imprint on his mind.

I made the mistake of queuing early for the opening of the gates. After an hour of increasing heat exhaustion the gate was unlocked and a crowd of us milled into the enclosure to collect brevets and transponders and head for the start. More queuing. Eventually we funnelled into the road behind the inflatable start-banner, hemmed in by barriers and surrounded by crowds. Melinda Lyon was a few metres ahead. She would finish in the, for her, modest time of 60hrs. Paul Whitehead was just out of earshot behind. The Cardiff contingent shouted from beyond the barriers on one side, Portsmouth folk yelled and pointed cameras from the other. In front of us were stilt-walkers and endless speeches and music. Above, the sun beat down. One of the stilt-walkers threw rose petals at us but the wind was against her and they blew away.

The speeches reached fever pitch, horns sounded, and we were away to clapping and cheers. It was nearly a road race, with sharp elbows needed at times. Speed, twisting roads, traffic islands, and no time to look for signs, just follow the wheels.

Eventually, as the peloton thinned, I found my pace. I was once more on the road to Brest.