Amnesiac Goes To Paris, then Brest, then back again (2007) - by Amnesiac Auk

I’d promised myself never again. Twice. So I'm feeling miffed at becoming caught up in the frenzy to the extent of finding myself standing again in a crowd of Paris-Brest hopefuls. And in the rain!

The Good Doctor and I set sail from Portsmouth to Le Havre, this particular sailing chosen for its comparative unpopularity with the audax crowds. However, there were two or three other groups on the boat and it wasn't until after crossing the Seine at Quillebeuf that we managed to shake the last of them off.

We navigated Evreux with the aid of a compass and ground to a halt in a place called Anet, with a large chateau and a small hotel-bar.

Arriving unexpectedly at the campsite the following morning, the Good Doctor departed into the sea of mud to search for his hosts, while I commandeered the wrong chalet. Strictly speaking it was not wrong when I commandeered it, but became so later when Mrs Pilbeam handed the campsite office a top-secret list containing chalet numbers with names appended. This resulted in a difficult herding operation involving loss of temper and, of course, mud, to corral all the auks in their proper berths.

In my absence my fellow chaleteers voted me the loudest snorer and thus solo occupant of the double room at the end. I was unsure whether to be annoyed at this, especially when they discussed piling spare mattresses against the door for sound insulation.

A friend of one of the others turned up. It was his first Paris-Brest. He said very little. He smiled not at all and made minimal eye-contact. He sat outside, a nervous leg movement causing the chalet to vibrate gently.

We repaired to the bar for pizzas and conviviality. Unfortunately I got into the wrong company and the conviviality continued into the small hours, making the task of finding my way home un-muddied difficult. A certain Mr Hummerstone is solely to blame for this mishap.

Sunday came. We went for the bike check. The bike check was cancelled - because of the rain. At the head of the longest queue in the hall a harassed-looking Noel Simpson was doling out paperwork. Food that evening was at an Italian restaurant. The waiters were overwhelmed to the extent that everyone got food, but not necessarily what they'd ordered. Dave Minter made an Australian joke about going to Brest for milk.

Monday. The mood was more sombre, the puddles, deeper. At the appointed time the Monday night starters drifted off. We, the 84hr lot, went early to bed and dozed fitfully. I was woken by heavy rain, possibly thunder, though it may just have been fireworks sending the riders off into the wet night.

Tuesday, 3am. Arise and breakfast sleepily, then fumble with bike locks and luggage, and squelch off to the start.

After interminable and semi-audible speeches concerning hazards along the route, we departed - a calmer depart than the nervous ninety hour lot, and fewer of us. Only a couple of riders failed to avoid the bollards and kerbs as we rode darkly through suburbia. The rain recommenced.

Always the line of red lights into the distance.

Twice I caught Mr Hopper on his barrow.

Said I, 'I shall run out of insults if we keep meeting like this.'
Said he, 'Booger off, you whiskery old sod.'

He always has a kind word.

At Tinteniac a reporter asked me why I was riding. I thought about replying 'for charity', but decided the joke would be wasted.

As we went west the sun came out. But not for long.

I dozed briefly and uncomfortably at Loudeac, the final control before Brest. Somewhere along the way Ivo Miesen loomed out of the mist and said that nearly all the Italians and Spanish had packed because of the weather. On the bridge at Brest stood Charlotte Barnes gazing absently into the distance. I assumed she'd packed but, at Loudeac on the return, she sat beside me laughing at a little joke I'd made about the best part of the ride so far. Or perhaps I was serious - on a long ride certain things attain a disproportionate importance.

Somewhere I had two hours sleep that turned into three.

Heavy showers. I believe I met the Mayor of Mortagne along the way.

I rode with a French group until one of their number stopped for a pee and failed to reappear. I left them rolling slowly and looking over their shoulders.

I followed a tandem rolling fast downhill. As they slowed on the flat I passed and thanked them. The captain was busy explaining the physics of a tandem slipstream to his stoker.

After Mortagne on the way back I had an attack of sleepiness. There was nothing for it but to stop and doze. Cyclists passed. Then one shouted, swung round and insisted I rise and follow him. Mr Hummerstone again. He being a fellow who casts a considerable shadow, I found the effect of sitting on his wheel similar to that of the tandem. I was sucked along effortlessly to Dreux.

The last stage was littered with riders apparently on their last legs. An elegantly bearded chap leaned left on his bike and cycled in leftward semicircles, jerking his bike back to the right as the verge approached. Several times I observed the technique of three pedal-strokes out of the saddle, followed by as long a freewheel as possible whilst sitting on one buttock. ‘Trying to freewheel uphill’, as Jim Hopper says. 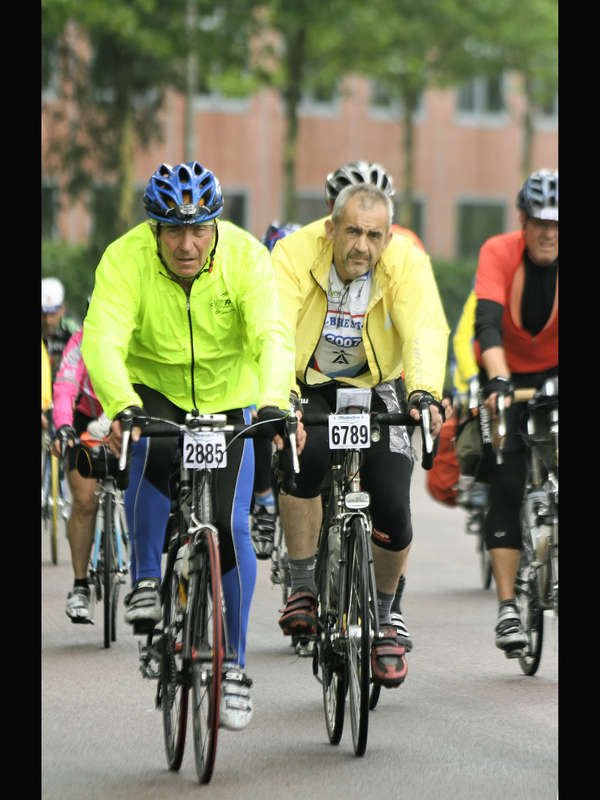 After the man with the bell (I asked not for whom it tolled…) I found another French group going at a good pace and we worked together back to St Quentin. Their local knowledge sped the way and suddenly we were at the roundabout with the crowds cheering and the ramp to the finish. It brought a tear to the eye.

A swipe of the card and the handing over of the brevet booklet, and that was it.

Sheila Simpson was leaving the food tent. Jim Hopper was dozing inside. Andy Clarkson was beerily happy, and Bob Johnson was crowing about getting a fifteen minute time bonus for being able to speak English (it must have been a spot check or something).

At the campsite the mud had deepened. All the mowing tractors were busy – dragging bogged down vehicles to tarmac. I went for a beer.

Later that night we found another Italian restaurant where the service was worse but the food good. Mr Minter turned up and cracked an Australian joke about having been to Brest for some milk.

Saturday morning, very early but possibly not quite early enough, the Good Doctor and I set off back towards Le Havre. We were endeavouring to catch the afternoon ferry and, indeed, might just have made it but for an inopportune puncture. Our punishment was to find a good cheap hotel in the town centre, and a fine restaurant.

The following day, Sunday, a road race, the Tour of the Maritime Ports, and supporting events were taking place. We watched children as young as five riding twenty minute races, older siblings shouting encouragement, parents coaching and cheering. Then, with a bottle of white burgundy and moules marinieres, we watched the criterium from the main square.

Others were at the ferry when we arrived. Stue Lee had dragged his barrow round the event under the direction of Steve Underwood. The crossing was calm.

And that was that. We were back in the UK. Mr Lee helpfully escorted the Good Doctor and me to the right roundabout, whereupon the GD sped happily off down the wrong exit. Eventually we found our transport and were homeward bound.

I’m not going to do that again. Almost certainly not.